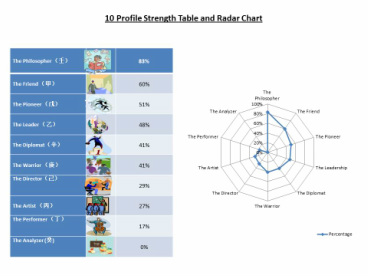 Sample Report in Table and Radar Chart
Everyone was born differently. In term of year, month, day, time and place. As such, we will have different character personalities. Thus even for twins, they will also have slight differences, although most are similar.

To find out what kind of personalities a person has, the four pillars of luck or Bazi (八字) can give you the answer. But first, you need to know what is your day master （日元）and what are the "10 gods" （十神）relationships to the day master. The table below are the 10 types of day masters (in brief context) :-

Having all said that, you must know the percentage of the ten gods （十神）in your Bazi （八字) chart, with regards to your Day Master, to obtain a higher accuracy of the different personalities.

Character Personality Report Service（性格分析报告)
If you want to know more about yourself for self improvement, your children for later development, or your employees (good or bad attitude) or whoever you are interested to know, have a better understanding of them, kindly contact us for a detailed report at $58 only. In addition, the report also indicates the positive and negatives characteristics of the person. It also tells you what are the jobs that are suitable for you. The only requirement are the date and time of birth (if possible).