What is Feng Shui (风水）or Geomancy to You?

Feng Shui (风水) is ancient Chinese system of aesthetics believed to use the law of both Heaven (astronomy) and Earth (geography) to help oneself improve life by receiving positive qi (气)*. The original designation for the discipline is from Kan Yu （堪舆）- Tao of Heaven and Earth.

The term Feng Shui (风水) literally translates as "wind-water" in English. This is a cultural shorthand taken from the passage of the ZangShu (葬书）- The Book of Burial by Guo Pu (郭璞) of the Jin Dynasty (晋朝).

Feng Shui is a form of traditional Chinese Metaphysical studies that origins from the Book of Changes - i-Ching (易经）that has no link with specific religious practices. Thus it was widely practised successfully by different people from different countries, ethnic group and religions without having to do any specific religious ceremony.

Historically, Feng Shui was widely used to orient buildings - often spiritually significant structures such as tombs, but also dwellings and other structures in an auspicious manner. Depending on the particular style of Feng Shui method being used, an auspiciious site can be determined by reference to local features such as bodies of water, stars, or a compass. But as the geographical and environment conditions changes with time, some ancient methodology of Feng Shui may no longer be relevant to modern applications. However, Feng Shui masters are still able to practise and apply those classical Feng Shui methods that are useful and applicable to modern-day environment.

The basic objectives of Feng Shui is to create balance and harmony of qi (气) of the environment (both internal and external) with the five elements (Metal 金，Wood 木，Water 水，Fire 火，Earth 土）to achieve the different kinds of "luck" or well being of the occupants. The type of "luck" or well being can be in terms of 1) career, 2) knowledge, 3) family, 4) wealth 5) fame, 6) relationship, 7) children, 8) Helpful people and 9) Health. Only by understanding the balanced environmental qi (气) - internally and externally, then Feng Shui masters can help occupants to harness these qi (气) and assist the occupants to enjoy the types of benefits as mentioned earlier.

Hoever, there is a point to note, Feng Shui is only part of the factors that helps to improve and change the life of a person. Thus besides having Feng Shui home or office audit done, it is important to look into the other aspects of a person's life to see how to enhance his/her overall well-being.

[(气)* refers to the cosmic energies that emerges from all matter, living or non-living, natural or man-made.] 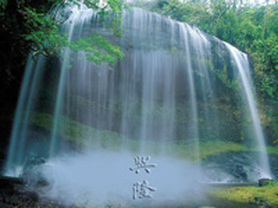 Feng Shui Painting (For illustration only)

There are many different schools of Feng Shui and also variations within each school due to family lineage practices. The below are their differences: - 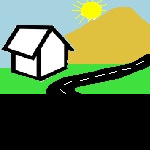 Picture of Landscape (For illustration only)
Landscape for Form School examines shapes and symbolism in the environment without referring to the compass or luopan（罗盘）. It studies and uses the shapes and forms of the surrounding landscapes, structures, waterways and roadways and how these shapes will affect people living or working in a structure. The four cardinal directions of the comapss are represented by four celestial animals: 1) The Green Dragon of the East, 2) The White Tiger of the West, 3) The Red Phoenix of the South and, 4) The Black Turtle of the North. Interior forms and layout of the structures are also analyzed. This form of Feng Shui study is also taken into consideration by practitioners of other schools of Feng Shui.

E.g The picture (on the left) shows the landscape (road, mountain, house location) that is used by this school of Feng Shui. 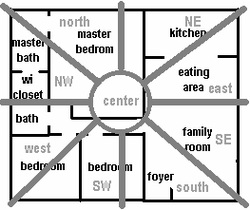 Eight Compass Sections (For illustration only)
Compass Feng Shui School is further divided into such schools as Flying Star （玄空飞星），Eight Mansions (八宅) and other. This school uses the compass or luopan （罗盘）, the Ba Gua（八卦）, Lo Shu Square （洛书）and feng shui calculations to determine the auspicious and inauspicious of a site. Compass Feng Shui also uses a compass or luopan to divide a home or office into eight compass sections. Each compass sections has one of the five elements(五行)  associated with it. 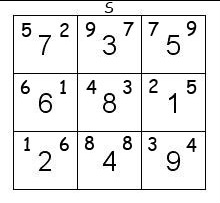 Flying Star Natal Chart (For illustration only)
Classical Feng Shui School - Xuan Kong Flying Stars, uses the year of construction of a home or office and the compass degree it faces to determine the pattern of energy which forms inside the structure when it is built. The energy pattern is called the Flying Stars Natal Chart. A building is divided into eight different compass sections and a middle section. These sections are called "The Palaces". In each palace, there is a mountain star (also called  sitting star), a water star (also called facing star) and a time star, each represented by a number. The way the stars interact with each other can have a positive or negative effect on the occupants. There are 9 different cycles of "period" of time which lasts 20 years each and repeat every 180 years. We are currently in the period 8 which begins 4 February 2004 till 3 Feb 2024. The occupants dates of birth are also taken into considerations. Each compass section has one of the five elements associated with it 1) Water, 2) Wood, 3) Fire, 4) Earth, 5) Metal. The compass sections and their elements are analyzed along with the flying stars that occupy each palace. The five elements are used to balance the flying stars.

The 9 Life Aspirations (For illustration only)
(BTB) was developed in the United States in the mid-eighties by Grand Master Thomas Lin Yin. BTB School of Fengshui is a combination of Tibetian Buddhist, Taoist, pyschology, Classical Feng Shui and is based more on a spiritual approach. This is also a simplified modern day version of Compass School Feng Shui and uses the same five elements and life aspirations but does not divide by the actual compass sections. Instead, a bagua map is aligned with the main entry door. The placement of symbols and intent is emphasized. It is also known as "New Age" or "Modern" Feng Shui. Since actual compass directions and flying stars are not taken into considerations, this is the least accurate of kind Feng Shui practised alone.